Your dog is smarter than a two-year-old

The reason why dogs get along well with children is that they speak the same language. Not really, but they understand approximately the same number of words and movements – 250.

A mustache helps a dog “see” in the dark

It’s not that they have “night vision”, but the hairs around the lips register the slightest change in air current, and in that way the dog receives information about the size, shape and speed of things around it. It also allows him to better sense danger or prey – even at night.

Dogs and cats drink water in the same way

It may seem to you that dogs are much more messy when drinking water, however both they and cats bend the tip of their tongue and lift the liquid towards their mouth while drinking water.

Dogs only have sweat glands on their paws

These glands are located between the soft part of the paw. This is because their feet would be wet during hot days, and because of that, dogs get cold by panting.

The dog’s mouth exerts an average pressure of 145 kg

These tests were performed on German Shepherds, American Pit Bull Terriers and Rottweilers. Compared to them, humans reach a pressure of 54.5 kg, white sharks 272 kg, while crocodiles can reach an incredible 1133 kg. Dogs also have ten teeth more than humans – 42.

Different breeds, of course, have different physical fitness, bigger dogs are faster than smaller ones.

Puppies may be born deaf, but they quickly acquire great abilities when it comes to hearing. Dogs also hear high-frequency sounds, and recognize tones from 67 to 45,000 hertz. Humans hear sounds from 64 to 23,000 hertz, and in both humans and dogs, the upper limit of hearing decreases with age.

Dogs can smell how you feel

Dogs quickly pick up even the slightest changes in your smell, which help him discover how you feel. So I can smell sweating when you are nervous or scared. It is also very likely that dogs can detect some diseases or get hit when one of the females in the house is pregnant.

Depending on the breed, dogs have between 125 million and 300 million odors – which is a huge number compared to a human’s 5 million. That is why the part of the dog’s brain that controls the smell is as much as 40 times bigger than in humans. At the same time, a dog’s brain is much smaller than a human’s, and makes up 1/125 of their body, while in humans the ratio is 1:40. Ants, on the other hand, have a brain that is only seven times smaller than their total weight.

Animal kingdom is a family company located in Rača, near Kragujevac, and is engaged in the production of granulated pet food, which is based on the concept of healthy nutrition of your pets, with the aim of eating healthy and quality food and developing properly. 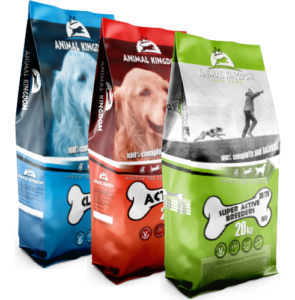